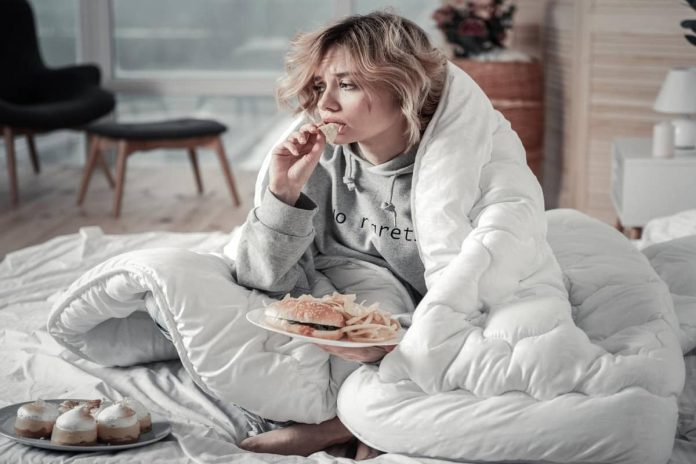 Emotional eating occurs when a person eats out of boredom or addresses an emotional need such as comfort or to lower stress. People of all ages, including teenagers, engage in emotional eating. It’s unhealthy because it does not act to provide nutrients or calories. These extra calories build up and lead to weight gain. Often, feelings of regret, guilt and inadequacy follow.

While emotional eating can help temporarily, it is a simple solution at best because after the eating is finished, the problem that caused it remains and maybe even be worse. Overcoming this issue needs to first start from the bottom up by identifying causes.

Boredom is one of the top causes of emotional eating in all age groups. It is also one of the most frustrating reasons because people often feel guilty afterwards. There are many reasons teenagers feel bored. A few include not having enough activities or being restricted to a small area because of a lack of transportation or safe walking paths.

For a person to stop emotional eating out of boredom, it’s essential to understand why this phenomenon is so common. The main reason is the neurotransmitter dopamine. It increases pleasure and motivation and is unleashed in such situations as people falling in love or getting addicted to a drug. Dopamine neurons go off like crazy, prompting people to feel like they have to take action.

It ties into emotional eating like this: suppose a teenager is bored and needs stimulation. He probably won’t know this on a conscious level, but eating leads to dopamine release—and thus, of inspiration.

The body craves emotional eating in several groups, and who can combat these cravings with conscious effort. The solution is for a teen to find a better way to get the dopamine neurons charged up. Simply being aware of the phenomenon is enough for some teenagers to stop eating out of boredom, but there are steps to follow if it isn’t.

Here is an example of a common scenario. A teenager gets home from school and unthinkingly heads into the kitchen. Before, he would reach for the ice cream. With preparation, he can ask himself: “Am I starving? Is my stomach rumbling? If the answers are yes, he can choose to eat something healthful such as an apple or cheese stick to tide himself over until dinner.

If the answers are no, he can ask himself why he is reaching for the ice cream. Is he bored? Upset? What else can he do?

When a teenager is stressed, it’s normal for her to reach for something that will calm her and make her world right—at least for a few moments. More often than not, food is that balm. For many people, it’s been that way since they were infants. When a baby squalls, his caregiver often replies by supplying him with milk. In times of death, how do families and friends help comfort the dead person’s loved ones? Food. Lots of food. Also, how do grandparents show love? One big way is food. These long-term patterns become ingrained and counterproductive. And that’s before hormones are factored in.

Constant stress results in increased production of hormones such as cortisol. With enough time and enough cortisol, a body develops pangs for certain foods and overeating. Why? Cortisol loves foods high in unhealthy items such as sugar, salt and fat. Not only that, fat cells produce cortisol, leading to a cruel cycle.

Teenagers could try these strategies to defeat what may be an automatic response to food in stressful times.

Research invariably shows that people who sleep less are at higher risk of eating more the day after. Moreover, people who sleep less often weigh more. Two hormones, leptin and ghrelin, are culprits in this. Ghrelin, which hails from the gastrointestinal tract, heightens appetite, while leptin, from fat cells, signals the brain when a person is a whole.

Lack of sleep leads to insufficient leptin being made, so a person’s brain won’t know when he is full. Not sleeping also causes ghrelin to increase, leading a person to overeat.

The solution seems simple—get more sleep by whatever means possible. Teens could exercise, so their bodies are more tired at night. They could avoid drinking caffeine after dinner and avoid brightly lit screens from laptops and tablets in the few hours before bedtime.

What Parents Can Do

According to familydoctor.org, there are plenty of ways parents can help a teen who is emotionally overeating. The first is to identify the problem.

Parents can ask their teenagers the following questions.

Parents should talk to their teens and explain why emotional overeating occurs. They should explain how bodies, neurotransmitters, and hormones complicate things, but overcoming emotional eating is undoubtedly doable.

Parents should serve as role models by:

Solutions Parents Can Give to Teens

1. Identify why the teen feels this way and find activities to replace eating. For instance:

2. Wanting to procrastinate? Just get started and feel productive much sooner!

3. Keep a journal of emotional overeating triggers. A food journal can contain how much was eaten, what was eaten, the time, how the teen felt (worried, stressed, happy, etc.). and whether the eating was for hunger, comfort or both. Once patterns start to emerge, Who can use the information to deal with overeating?

Here are some signs a person is experiencing physical hunger.

Here are some signs a person is experiencing emotional hunger.

Overcoming emotional eating in teenagers certainly takes time and conscious behavior, both on the part of the teenagers and their parents. Understanding the body’s role in the process and finding alternative strategies to stimulate and to staying busy is a huge key.